On our most recent hiking trip to Baxter State park an idea came to me on my way down the mountain. This was after I had quit--started again--quit again and finally made it to the top of South Turner Mountain after a phone call from the summit with Richie telling me I had to finish (the summit was worth it). So on my way down you could say I was pretty proud of myself, happy, and having fun. One conversation led to another and we began talking about all of the "adventures" (as we like to call them) we had been on in the four years we have been dating. It's one of my favorite things to do. Usually after every trip, I can never get home fast enough to tell everyone about everything we did; all the laughs, the quirks, and fun things we saw along the way. And that's when the idea popped into my head, "Why don't we start writing it all down?!". I had been toying with the idea of a journal for about a year now but in 2012 what's better than writing your own blog? (Even if it's just for the two of us). So here we are. We now have the task of  going back to the beginning, June of 2008, and writing down what we remember best from our trips; and we have been extremely fortunate to have been some great places together. Richie remembers all the silly things I do, like lose keys in the ocean, and how I hate waking up for his early morning adventures. I remember the food--and which hotel had the best soaps and pillows. And from here on out, we will tell our stories to who ever might be reading.

Posted by Unknown No comments: 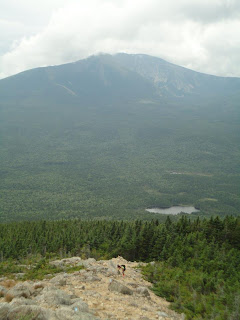 The Plan:
Rachel works on Monday and Friday as well as every other weekend. This doesn't make it easy since most of the time I work Mon-Fri and my traveling days are Tues-Thurs. Either way, Rachel decided to join me for a couple days of work. We planned to stay in Wells, ME at the Hampton Inn on one night and from there I would travel to the power plants while she went to the beach. The following night we planned to spend in Bangor and the last night in Millinocket.While in Millinocket we were hoping to spend a half day climbing or trying to hike Katahdin.

The Execution:
The hotel in Wells, ME was booked, so I searched for one closer to Biddeford where the plant was. Turns out that the hotel in Biddeford was also booked, probably because of the weather and the rush to Old Orchard Beach.

Monday:
We left the house at around 8PM because Rachel spent some QT with Jen. We got stuck staying in South Portland by the Maine Mall.

The Food:
I had Village Pizza while driving on the way up to Maine. Rachel ended up feeding it to me because it's a lot more difficult than it sounds eating pizza on the road.

Tuesday:
Tuesday was a busy day, I had customer meetings all day and Rachel enjoyed Scarborough Beach for the first time. I dropped her off in the morning after getting breakfast and she spent the majority of the day at the beach. When I went to pick her up from the beach, I accidentally threw my car keys out in the trash which caused some anxiety! Tuesday night we drove up to Bangor, ME to spend the night at a new Hilton Hotel.

The Food:
We went our separate ways on the food since I was busy with customer visits. Had Scarborough Grounds for breakfast. The Run of the Mill for lunch with customers. Union River Lobster Pot in Ellsworth, ME with customers for dinner. 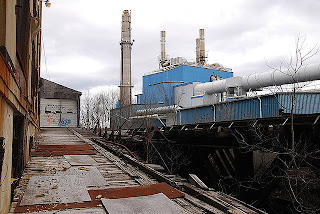 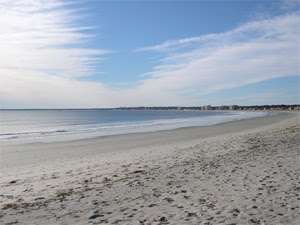 Wednesday:
Wednesday we woke up in Bangor and we went our separate ways in the morning. I went and picked up some pastries for a customer meeting. Rachel slept. After my meetings we decided to head up a little further north to Baxter State Park. We hiked a short hike called South Turner Mountain after we received advice from a ranger which told us to stay away from Katahdin due to the inclement weather. 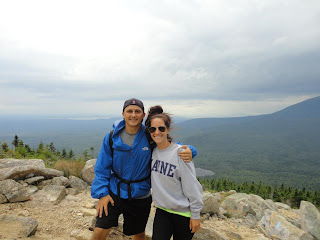 We walked a few different short trails, this included a spot called Sandy Steam Pond which is popular for spotting moose. Apparently there's a family of moose that live nearby and have been spotted frequently in this spot. Besides the moose it's a perfect spot for a scenery shot.

The Food:
Not much. We ate granola bars on the hike and lots of water! I also ate at River Drivers with customers from the mill. That place was pretty awesome, overlooking Katahdin. 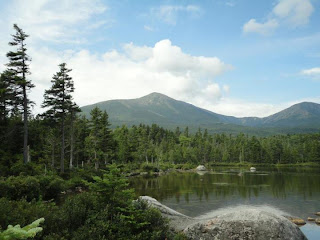 Thursday:
After a customer meeting Thursday morning in E. Millinocket we made our trek back home. Funny thing about my customer visit is that we ran into Bob Chases wife. Bob Chase's article on hiking Katahdin was our "bible" for the trip. He told us everything to bring, where to go, what to look for etc. We didn't climb Katahdin but it was a strange coincidence to run into her at my customer meeting. 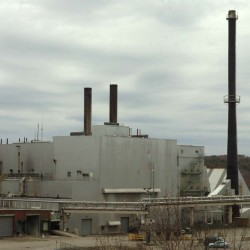 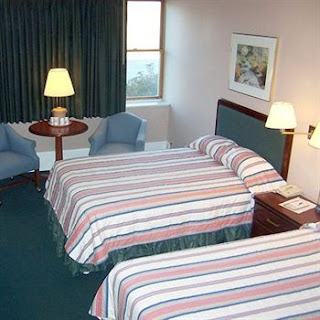 It was pouring rain so there was no need for stopping. We ended up stopping for gas and salt water taffy in York, ME at The Golden Rod. 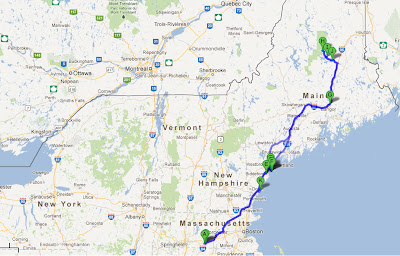 What I always find fun about our adventures, is that Richie and I remember different parts about the trip; the good, the bad, & the in-between-- so put together, you get the whole picture, & since he wrote first about our recent trip to Maine, I'll be writing my section of "What I remember". 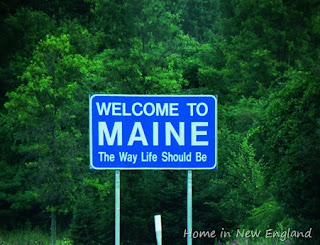 First I will start by saying, I am always excited to go to Maine. It was the very first trip Richie and I took together and it's all in all just a great place to get away. No matter where we go, the people are always friendly, and the air seems to have something special about it that just makes you feel like "Yeah, I'm on vacation". Even though Richie had to work much of the time, we did get to enjoy some hiking, and beaching along the way.

The week before the trip, I was really looking forward to our hike up Katahdin, and a chance to eat yummy lobster!! We're amateur hikers and have only hiked one mountain before, but I enjoy the challenge and the chance to see the incredible scenery. But I was also looking forward to getting to spend the day on the beach. We usually spend a lot of time at Short Sands in York Beach, Maine, however Richie had mentioned there was a nice beach (Scarborough Beach) near where his meeting was going to be. As it turns out he was right !! The beach was stunning. The sand is super soft, no sea weed, and stretches for what seems like forever. The parking is limited which means there were a limited number of people to crowd up the prime blanket spots. I expected the water, like all other water in Maine, to be freezing but it was just right. Pristine clear water, beautiful waves (I didn't bring my boogie board along this trip) but best of all was that as I walked along the beach I found sea glass what seemed like every step !! I love collecting little things from our trip to bring home.

As much as I love talking about the beach, I must get to the case of the lost keys. You can't appreciate this story fully without knowing the story of how we have lost our keys in the ocean once already in Maine but I will tell it anyway. After walking the beach and some last chance body surfing with Richie, we decided to pick up and head on our way because we had a long drive to Bangor. We walked the little ways to the showers, rinsed off and made it back to the car...and then it plays out just like I remember it happening before: Richie asks where there keys are, I tell him I don't have them, We look through our bag, shake out blankets, only to realize they are no where to be found. Richie went back to look on the beach while I sat by the car contemplating who would drive us up the extra set of keys (we are now three hours from home) and what we would do in the mean time, when he called my phone. "You wont believe where I found them.." and I didn't. They had fallen into the little bag of trash we had thrown out right before we left the showers. There aren't enough words to explain how relieved I was that we were not going to have to go through "Maine: The Lost Keys part II". 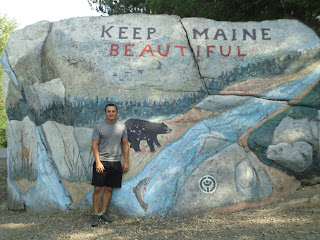 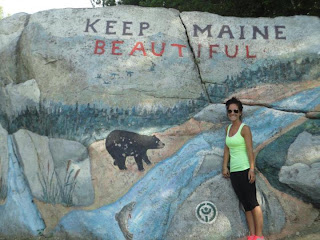 Richie covered most of the in-between, except for the fact that he neglected to tell me how long it was going to take us to get to Baxter State Park..he knows I hate long car rides. However once we got to Millinocket and I saw how beautiful everything was I didn't care at all. I had my granola bars, my sneakers, my camera..and Richie. Looking a the weather the night before we had decided to go with a slightly smaller mountain, rather than hike Katahdin which suited me just fine. 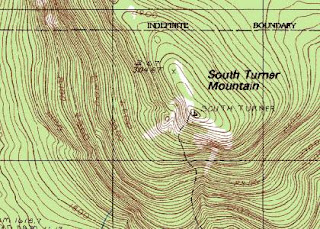 It started out easy enough with logs split in half and laid end to end for people to walk on. It wound around this beautiful and peaceful pond that many people report seeing moose. I was desperate to see one but I would have to be happy with an incredible view of the mountains, as the moose were being a little shy that day. We continued along only to find that the trail was getting a lot harder, and quickly. Soon I found myself climbing with my hands over huge rocks going straight up into the sky...or so it seemed to me. Richie had an easier time and I found myself needing more and more breaks. I almost gave up a few times, and at one point sat down with my backpack and told Richie to go up with the camera and call me when he made it. Little did we know we were only about ten minutes from the summit and Richie said I had to find a way to get up there. I knew I would be disappointed in myself if I didn't, so I picked up my backpack and hiked the last ten minuets to the summit to find that both Richie and I were completely alone with 180 degree view of Katahdin, North Turner Mountain, and a handful of lakes. The view was, at the risk of sounding cheesy, breath taking. The trip left me more excited about planning future hiking trips, and eager to start this blog. All things considered, another successful adventure.
Posted by Unknown